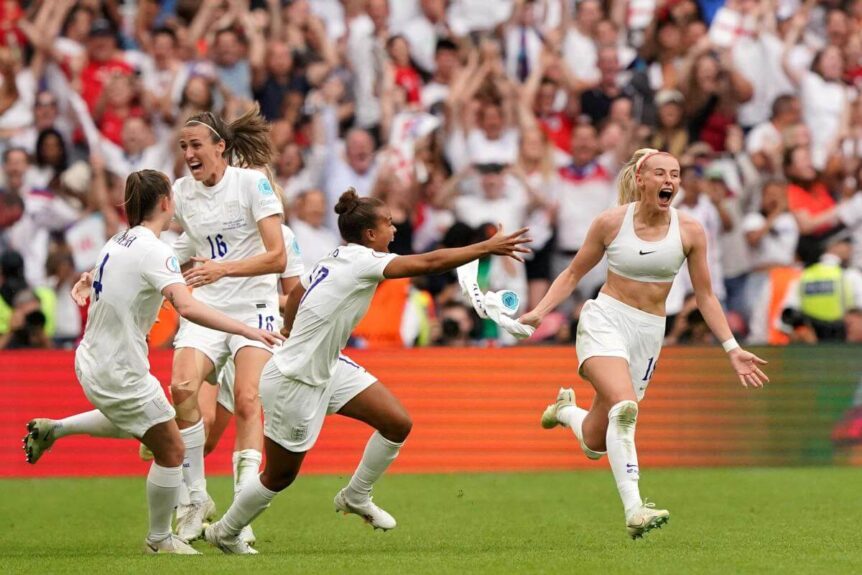 UEFA Women's Championship –Fair pay between Men and Women
As our lionesses surged to the finals of the Europeans Championships, women’s football took a leap forward to recognising the parity in comparison to men’s football. This year’s Euros saw a record surge in terms of attendance and viewers. However, women’s football is decades, if not a century, behind the development of the men’s game – and according to manager of Chelsea FC Women, Emma Hayes, it should be viewed as ‘a separate product’, because it is a different product, and in that respect, it presents different opportunities.

The facts show the pay difference between men and women’s football as not just categorising each as a ‘separate product’ but in fact on completely opposite spectrums, despite the objective of each game being the same. Leah Williamson, an English professional footballer for Arsenal and captains the England national team reportedly earned £200,000 last year, which even though is 8 times higher than the average UK salary does not compare to male football players earnings. The highest paid male footballer is Cristiano Ronaldo who takes home £26,520,000 a year. A huge difference! The Lionesses' bonus for winning Euro 2022 was just £55,000 per player, whereas the men's team were paid £300,000 for reaching the final of Euro 2020 - winning the tournament would have led to a £460,000 pay-out.

Unfortunately, football isn’t the only industry where pay gaps between men and woman exist. Employers with over 250 staff are required to submit payroll figures to the government each year as part of gender pay gap reporting regulations. Last year results found the sectors guilty of unequal pay included Finance and Insurance, Education, Information and Communication and many more. The differences between the pay can be up to 76p for women to every £1 that a man receives. Last year, the Institute for Fiscal Studies claimed that the gender pay gap has seen “barely any change” over the past 25 years once the highest-educated women (those most likely to be in senior roles) were accounted for.

Companies who recognise that there is a pay gap between the two sexes often try and put context behind why. Reason one is the fact there are more men in senior roles than women. This is because it’s assumed that senior roles include long working hours which fits perfectly with the 1950s notion of men going out to work and women being at home to support them. The second reason is that woman choose to care for children and are therefore more likely to end up in part time roles. This is based on a similar assumption to the first reason: that is, that part-time jobs are ‘naturally’ less senior, and so are automatically downgraded. And positioning part-time work as women’s ‘choice’ not only suggests that women are responsible for their lower earnings, but also takes the pressure off employers to do anything about it. Reason 3, women choose to work in low-paid roles and sectors. A subtle shift of blame from those guilty. This is because lower paid roles carry characteristics that are regarded as ‘feminine’ such as people and caring skills.

Here at Brite Recruitment, we work with clients that recognise your skill set and offer you the position regardless of gender. We are currently an all-female team we so understand the importance of fairness within the recruitment process and are proud to have a client who are one of the UK’s Best Workplaces for Woman.